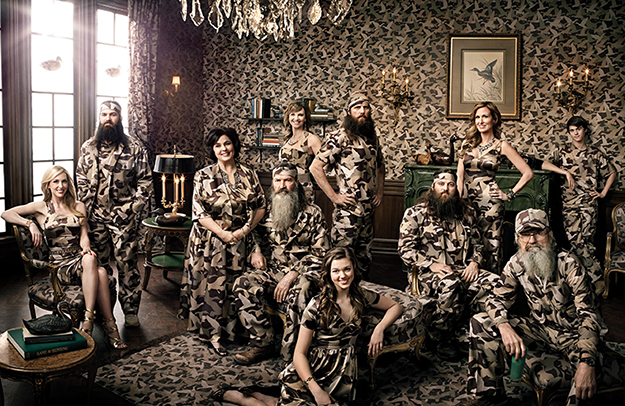 Duck Dynasty chronicles the Robertsons’ quintessential American Dream. There’s Phil (the patriarch who founded the family-owned business, Duck Commander) and his brother Si. Then there are Phil’s sons – Jase, Willie (who grew the company into an empire), and Jep. Duck Commander sells duck-hunting products – and it remained relatively small for decades. Today, it’s a multimillion dollar giant that generates approximately $400 million in retail commodities. If you browse through Walmart, you’ll see an assortment of merchandise bearing the Robertsons’ camo pattern and Duck Dynasty brand. I’ve stumbled upon pajamas, rugs, books, bedding, body pillows, clothing, chairs, chia pets, and everything imaginable (and unimaginable).

From a superficial glance, some people might be a bit turned off – and down-right offended – by the Robertsons. But, if that’s you, please read on. A lot of the controversy dissipates when you take a more scrupulous look. To be honest, I had several internal questions. And, of course, I had a few that I probably shouldn’t share. But I believe my questions were answered during my interview with Duck Commander CEO Willie, and his wife, Korie.

MARSHA DUCILLE: Willie, during your speech to your alma mater (Harding University), you stated that your greatest criticism comes from your church. What did you mean?
WILLIE ROBERTSON: [chuckles] You know, it’s funny. We have a little inside joke that, umm, it’s mostly Christian people who have problems with us. That’s not just our church. It’s all around. I don’t know what that thing is. I guess, with organized religion, they start getting really legalistic. Sometimes people get caught up on the little things – they don’t agree with this, and they don’t agree with that. They don’t see the big picture. They don’t see that we have a show with a prayer at the end of it – which reaches hundreds of countries around the world, and that’s positive. It’s frustrating, but that’s people.
KORIE ROBERTSON: Yeah, that’s the way it is. That’s people. We notice the criticism more with people in the church. It’s like whoa! We don’t expect that, but that’s how it is. I think some Christians ask, “Why are they getting into the entertainment industry? It’s evil.” But we were taught that’s exactly where we need to be. We need to be a part of what’s affecting our culture, and entertainment is certainly affecting our culture in a huge way.
WR: A lot of people get stuck in the four walls of their church, and don’t understand that there are a lot of things happening outside of those four walls. And I think, when people are unable to travel outside [their environment], they get stuck. They think that God only does things within the four walls of the church. But Korie and I get to travel all over this country, and all over the world. That’s how we’ve been able to see people doing all sorts of creative things for the Lord – really brilliant things that keep up with the culture of today. We’ve been encouraged by that. But I have a couple of haters, [and] haters gonna hate.
KR: Even Jesus, who was perfect, had people who hated Him. Even to the point where He was thrown on the cross. So, of course, there are going to be misconceptions about us. There will be people who don’t understand us or our message. But we try not to worry about it, and we just stay focused on what God thinks about us.

« PREV PAGE 2/4 NEXT PAGE »
More in this category: « Joyce Meyer Donnie AND Andrea McClurkin »
back to top