MY NAME IS SHANE STANFORD, and I’m a giant killer. Not the giants of fables and lore, but the real kind. The ones that keep us up at night with worry and fear. At one moment or another, all of us have been called out by these monsters. Maybe it’s your marriage, health, finances, or relationship with your children. Maybe it’s a broken friendship, loneliness, issues at work, or a struggle with your calling. Whatever it is, you have to make a decision to conquer it. Sure, you can cower – or you can say “enough is enough,” and fight.

My first real battle with a giant happened when I was 16 years old. It was the summer of 1986, and I went to bed with the “world on a string.” I was captain of the golf team, president of my student class, and dating the prettiest girl in school. The next day, my doctor told me that I was HIV+. The virus was contracted from medicines (made of human blood donations) that were used to treat my hemophilia. At that time, there weren’t effective treatments, only the sobering reality of a life that would most likely end in suffering. The giant of despair grabbed and beat me.

Just a few weeks after my diagnosis, my grandfather asked me a question: “What are you going to do with this thing?” I knew exactly what the “thing” was. He didn’t have to spell it. We all knew that we had a monster on our hands, and it would be difficult – probably impossible – to stop it. My response was honest, though defeated. “I don’t think I have any options. It is too big,” I said. Then my grandfather looked into my eyes and responded, “Son, you have a tough road ahead of you. This is a terrible situation, and you have every right to run and hide. But you always have a choice, no matter how difficult the situation looks. You can run and hide, or you can stand and fight.” 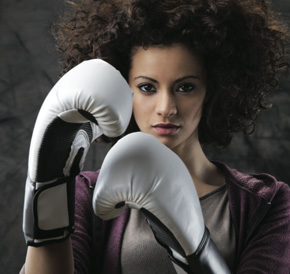 A New Take on a Familiar Story
During this tough period, I heard a sermon on the story of David and Goliath. Of course, I had heard the story many times before, but this particular interpretation shed a new light on the children’s version. First, it was graphic. I had no idea that David cut off Goliath’s head. Second, it was personal. You could feel Goliath’s rage and hatred – not just at David, but also at everyone and everything. And you could feel David’s determination to defeat the giant. I finally understood what it was like to face a giant who screamed at me, and belittled my faith. I understood how it felt to have the world say, “There really isn’t anything else we can do.” As I listened to the sermon, I was there, on the battlefield, feeling fed up with Goliath’s taunts and slander. But finally, David said to King Saul, “Your Majesty, this Philistine shouldn’t turn us into cowards. I’ll go out and fight him myself” (1 Samuel 17:32, Contemporary English Version).

The story of David and Goliath is about anyone who’s had enough of intimidating giants. Since my conversation with my grandfather (over 25 years ago), I’ve lived a truly blessed life. I’m married to my high school sweetheart – the “prettiest girl in school.” We have three beautiful daughters, I pastor an amazing church, and I’ve had successes in my personal and professional lives. But my life hasn’t been easy. I’ve faced the giant of disease, the giant of a broken body, the giant of broken relationships, the giant of despair and confusion, and the giant of hopelessness along the way. And that’s just a few of my giants! Like David, some of my giants looked unbeatable, or the outcome was uncertain. And, also like David, I heard the whispers: “He is just a shepherd boy.” But then I would remember that, in our faith, shepherd boys are also giant killers.

More in this category: « Face Your Fears Republican Front Runners »
back to top