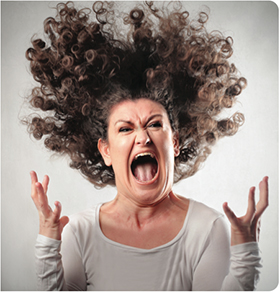 IT WAS FRIDAY AFTERNOON around 3:00 p.m., and traffic was moving very slowly on the Interstate 10 freeway. I was headed to the Los Angeles garment district, because I needed to pick up some special buttons for an outfit. Of course, I should have made the trip earlier in the day, but I got tied-up responding to emails. Without the heavy traffic, this little round trip excursion would have taken less than an hour. Within minutes of getting on the freeway, I looked in my rearview mirror and discovered a huge sports utility vehicle – just inches from my bumper. The tailgater was trying to intimidate me, and make me go faster. I immediately felt irritated. He was violating my highway boundaries! I thought, I should teach him a lesson and drive even slower. Can’t he see it’s impossible and unsafe to go any faster in this traffic?

As I contemplated retaliating or ignoring the bully, traffic came virtually to a standstill. There was no way I would make it to the fabric store, grab the buttons, and get home in an hour. I felt extremely frustrated. After what seemed like an eternity, I decided to exit the freeway and take local streets. As I drove my car toward the exit lane, a car sped down the shoulder and barely missed me. I was infuriated! The driver could have killed me. I fantasized about shooting out his car’s windows (with a nonlethal weapon – specifically designed to punish reckless drivers). In that moment, I understood why some people succumb to road rage.

To some degree, anger is something that we all have to deal with. It can boil-over while we’re driving, under pressure at work, or faced with a “line-skipper” at the grocery store. Both petty and major issues can cause fits of rage that lead to destructive behaviors. No matter where you fall along this spectrum, you can learn to control your anger ... instead of your anger controlling you. Proverbs 29:11 states, “Foolish people lose their tempers, but wise people control theirs” (New Century Version).

What is the Root?
I grew up in a household where anger was a regular guest in our home. My dad was a good provider who exercised great financial discipline, but he had a volatile temper. Domestic abuse and corporal punishment were the norm. Even when everyone behaved, Dad was still always angry. At his core, he loved God. He was a faithful deacon, Sunday school superintendent, and a trustworthy church treasurer – but his anger would get the best of him. Similar to me, many people come from backgrounds that fostered anger and strife. However, your past doesn’t have to determine the direction of your life. You can locate the root of your anger, and pluck it out of your life. Ask yourself this: What things make me burst? – I’m talking about situations that make you want to attack someone, and have them “pay” for what they’ve done. – Who in your life taught you (directly or indirectly) to respond in destructive ways? This information will help you understand the deeper causes of your anger. And as the saying goes, knowing is half the battle.

PREV PAGE 1/2 NEXT PAGE »
More in this category: « Be Flexible Face Your Fears »
back to top