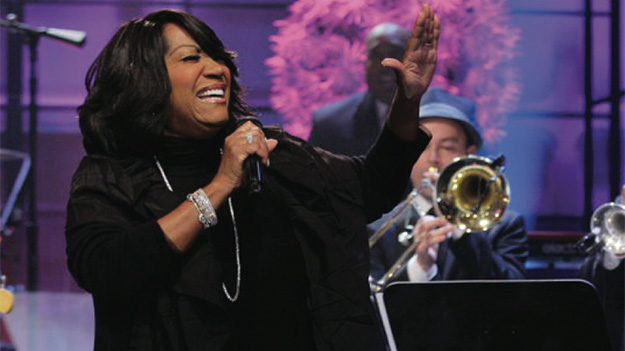 But God, in His way, always reminds me to replace my negative thinking with something positive. So, I decided that, if I want to live, I have to start doing a better job at taking care of my diabetes. If I want to live, I have to do better, change my negative thinking, and change my negative habits. There are certain things that I can’t control, but I leave those things in God’s hands. Diabetes is something that I can control, so I’m now keeping my mind on doing that.

MD: You mentioned feeling guilty when your three sisters died. Why did you feel that way?
PL: I felt the most guilt when my sister, Jackie, died.

MD: Why?
PL: I knew that my sister, Barbara, was dying. I knew that my sister, Vivian, was dying. But I didn’t expect Jackie to die when she did. And, when Jackie was in the hospital, my Aunt Hattie Mae called me. She said that Jackie wanted me to make her an egg and bacon sandwich. I said to Hattie Mae, “I just got home from the tour, and I’m tired.” The next day, I got up, and while I was making the sandwich to take to the hospital, my Aunt Hattie Mae called again. She said, “Sugar, don’t rush. Your sister just died.” That was the worst moment of my life. Acting like the spoiled brat that I was at the time, I decided to wait until the next day to bring my sister the sandwich. Yes, I was tired, but my sister was in the hospital. Being selfish, I assumed that I could make it tomorrow, but tomorrow never came for Jackie.

MD: How did that situation change your life?
PL: It taught me that we should never put off loving people. If it can be done today, don’t put it off for tomorrow. I denied my sister a sandwich, because I was being selfish. That was my biggest mistake. We don’t know how long people will be here. We don’t even know how long we’ll be here. Now, I don’t wait to show people how much I love them. And I don’t wait to help them. If I can do it now, I do it now.

MD: After your sister, Jackie, died, didn’t you adopt her children?
PL: I did. I have five children. I gave birth to one child; my son Zuri. I adopted Jackie’s two children when she died [Stayce and Billy], and I adopted my neighbor’s two boys [Stanley and Dodd] when she passed.

MD: That’s incredible.
PL: Marsha, I wasn’t incredible. God changed my heart. After Jackie died, I began to see the light – literally. Some days, I hurt so bad that I would close the curtains in my house. I wouldn’t let any light come in. In hotels, I would tape the drapes shut. I just wanted to be in the dark. But God pulled me into the light. He strengthened me, and allowed me to open up my heart. If I’ve done anything good, it’s because God did it through me. I’m now a better person, because of Him.

« PREV PAGE 2/3 NEXT PAGE »
More in this category: « Kathie Lee Gifford Joyce Meyer »
back to top