I LIVED IN SOUTHERN CALIFORNIA for over four decades, and I experienced the worst earthquakes of that period. I never got used to them. They happened suddenly, without any warning whatsoever. You had no idea how long they would last, how strong they would be, or how much damage they would do. Some earthquakes were so violent, I couldn’t even get to a doorway for safety.

It was most terrifying when an earthquake happened at night. Even if the power didn’t go out, there was no way you could get to a light while the room was shaking violently — unless you kept a flashlight under your pillow. Even then, trying to grab it could be nearly impossible. When a strong earthquake comes, your life feels totally out of control. You don’t know if you will be killed, buried alive, or badly injured.

Spiritual Warfare
Much like earthquakes, spiritual warfare can catch you off guard — many people prefer to pretend it isn’t happening. But if Christ is your Savior, you’re in a war with His enemy (the devil). You may think you’re not at war with anyone, but the enemy is at war with you.

Most believers pray for God’s will to prevail. But God calls us to do more than that: He calls us to go to battle as prayer warriors for His kingdom. He doesn’t mean a select few. Not just the most spiritual. Not just the ones who “like that kind of thing” or have nothing else to do. He calls all believers to be active in this war. 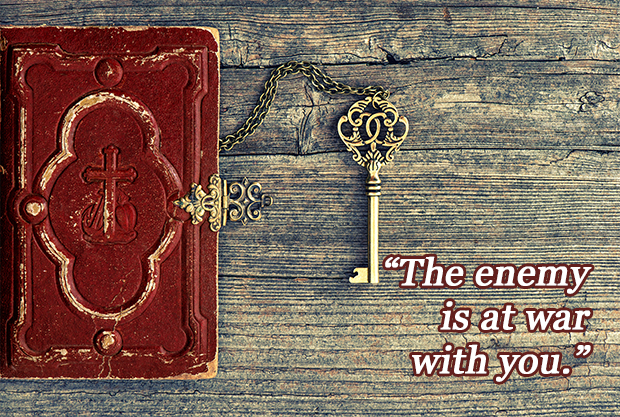 The Sword of the Spirit
Our main weapon is the Word of God. It is highly accurate, and if you aim correctly, it hits the target dead-on every time. The enemy cannot stand against it. When Jesus faced the enemy’s temptation in the wilderness, He resisted with Scripture. And He was victorious.

It’s crucial to have verses etched in your memory that you can draw on at all times. You can start with just one verse. Write it down on a notecard, and carry it with you. Tape it to your mirror or refrigerator — wherever you will see it most often. Say it. Proclaim it. Make it a part of you. You will need these Scriptures for the rest of your life, especially when you face the enemy.

PREV PAGE 1/2 NEXT PAGE »
More in this category: « Generational IQ Despite Your Pain »
back to top