What happened to family-friendly television? The days of The Cosby Show, Growing Pains, and
7th Heaven seem long gone. In the 70s, families looked forward to The Waltons and Little House on the Prairie. In the 80s, we loved The Facts of Life, Mr. Belvedere, and Family Ties. And who can forget the 90s with Steve Urkel on Family Matters, and D.J. Tanner on Full House?

Well, if you miss the “good ole’ days” of family-friendly entertainment, you’ll love Hallmark Channel’s new original series: Signed, Sealed, Delivered. It's a wonderful mixture of comedy and drama – created and executive produced by Emmy® nominee Martha Williamson (Touched by an Angel). The show follows four postal workers who track down the recipients of undeliverable mail. Their adventures take them into an unpredictable world where letters from the past save lives, solve crimes, reunite old loves, and change futures – by arriving late, but somehow on time.

“Writing and producing is the way I share my Christian faith and minister to the world,” says Martha Williamson. “It’s the gift that God has given me. With Touched by an Angel, we were given the opportunity to create a show blatantly based on biblical values. It was about angels. But Signed, Sealed, Delivered is about human beings who struggle with their faith. Angels don’t have to have faith, because they can see the truth. But, as human beings, we have to work out our faith with fear and trembling. We have to live out our faith – even when we’re afraid. That’s what this series is about,” Martha continues. 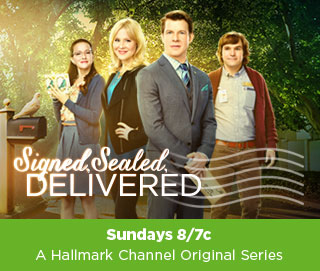 Oliver O’Toole (played by Eric Mabius) is a genius postal detective, and the group’s leader. “He’s a man who is trying to live out his faith with power, might, and a strong mind,” Martha says. “I always wanted to be the person who made people say, ‘Wow! Why is she so kind? Why is she so loving?’ Then, later, people could discover that I’m a Christian. The character Oliver is like that. People see God in Him, because of the difference he makes. You can see his faith in the way he lives.”

The character Shane McInerney (played by Kristin Booth) is technologically savvy, but at the risk of losing touch with people. In an age when texting and tweeting replace dinner conversations, Shane’s character sends an important message about the limitations of technology. “Oliver is the writer in me (the person who doesn’t want to lose old fashioned values – like character, meaningful relationships, and integrity),” Martha states. “However, Shane is the producer in me (the person who wants to be efficient and relevant). Together, the characters are able to achieve balance. Then there’s Norman Dorman (played by Geoff Gustafson). He’s shy, reserved, and somewhat awkward. Believe it or not, I’m a bit shy, too. But Norman’s character reveals that everyone, even shy people, can make a huge difference in this world.”

Rita Haywith (played by Crystal Lowe) might be the most heart-warming character. She has a photographic memory, yet she always sees the best in people. “I’m not saying that I am Rita, but she’s the person who I would like to be,” Martha confides.

When asked about wearing her faith on her professional sleeve, Martha is forthright. “I have to be bold about my Christian faith. I have no choice. The Bible says, ‘To live is Christ, to die is gain.’ So, I’m not afraid. Whenever I’ve stepped out in faith, I’ve always found solid ground,” Martha states. “I’m called to be obedient to the Word of God, and do everything that God desires me to do. The famous humorist Erma Bombeck once said, ‘When I stand before God at the end of my life, I would hope that I would not have a single bit of talent left.’ That’s exactly how I feel. I want to use every gift that God has given me. I want people to watch Signed, Sealed, Delivered and be encouraged to make a difference. I want families everywhere to be touched by love and faith. In this world, we are likely to face situations that challenge our integrity, and this series gives us the strength to make the right decisions,” Martha further asserts.

For More Information, or to Access a Channel Locater, visit HallmarkChannel.com/SignedSealedDelivered

More in this category: « 7 Spring Fashion Trends Surprise, Surprise! »
back to top