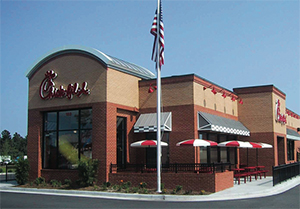 Following the national uproar over Dan Cathy’s comments, Mike Huckabee (the former governor of Arkansas) urged Christians – and those who believed in religious freedom – to “affirm a business that operates on Christian principles, and whose executives are willing to take a stand for the godly values we espouse." So on August 01, 2012, countless Americans flooded Chick-fil-A locations to show their support. "While we don't release exact sales numbers, we can confirm reports that it was a record-setting day," said Chick-fil-A's Executive Vice President of Marketing, Steve Robinson.

Be Brave and Honor God
As a Christian, but particularly as a Christian business owner, you’ll have to be brave. Conventional wisdom will tell you to focus on popularity and sales, but that will open the door to spiritual compromise. In Deuteronomy 8:18, the Bible teaches, “Remember the Lord your God. He is the one who gives you power to be successful” (New Living Translation). Accordingly, if you focus on pleasing God, your business will grow (despite the opposition of naysayers). Chick-fil-A founder Truett Cathy built a business empire on biblical – not worldly – wisdom. His company’s Statement of Corporate Purpose declares that the business exists "to glorify God by being a faithful steward of all that is entrusted to [them]. To have a positive influence on all who come in contact with Chick-fil-A.” This commitment led Truett Cathy to close all Chick-fil-A locations on Sunday (one of the busiest days in the restaurant business). Yet, Chick-fil-A generates more sales in six days than most national chains produce in seven.

Closing Chick-fil-A on Sunday is just one way that Truett Cathy places “principles before profits.” In his five-step recipe for business success – a set of principles that helped Chick-fil-A become an indomitable force – Cathy states, “I was not so committed to financial success that I was willing to abandon my principles and priorities. One of the most visible examples of this is our decision to close on Sunday. Our decision to close on Sunday was our way of honoring God, and directing our attention to things that mattered more than our business.”

Help People
When you’re a Christian, giving back is not an option. It’s a requirement. Proverbs 31:8-9 instructs, “Speak up for those who cannot speak for themselves; ensure justice for those being crushed. Yes, speak up for the poor and helpless, and see that they get justice” (New Living Translation). In essence, God works through His children. He blesses Christians – and Christian businesses – so that we can help people. And when we give God the credit, this brings Him glory.

Over the past three years, Chick-fil-A and its franchised Restaurant Operators have given more than $68 million in contributions to over 700 educational and charitable organizations. In addition, they have provided millions of dollars in food donations across America.

Focus on Your Center
As you build your business, keep God at the center of your decisions. Popular opinions, changing politics, and your fears will tempt you to coward in the face of opposition. But be bold and strong, because God is with you. – And while being courageous, never stop communicating with wisdom and love.

« PREV PAGE 2/2 NEXT PAGE
More in this category: « Lessons from Mary Kay Ash Start a Business »
back to top