AT THE AGE OF 11, Bill Wilson walked down a street with his mother. They stopped, and sat down. Bill’s mother told him to stay, and instructed him to wait until she returned. For three days, the child waited. But his mother never came back. A Christian man noticed that Bill was abandoned, and rescued him. That’s when Bill’s relationship with God began.

According to statistics, the odds were against Bill Wilson. He was poor and neglected. His father walked out, and his mother was an alcoholic. Bill was more likely to become a burden to society, rather than a blessing. But that deserted 11-year-old boy grew up, and now – known as “Pastor Bill” – he rescues over 100,000 children each week.

Beaten, Stabbed and Shot
In 1980, Pastor Bill founded Metro World Child (formerly Metro Ministries) in one of Brooklyn’s roughest neighborhoods, Bushwick. The community was known for its gang violence, crime, drugs, and poverty. But Pastor Bill felt the Lord calling him there.

“In those early days, it was rough for him,” says Penny Hollenbeck, Executive Director of Metro World Child. “Pastor Bill was beaten, stabbed, and shot. On one particular day, he went down to the East River to see some homeless guys. He went there to take them food, and got jumped by two men. They roughed Pastor Bill up really good, put a 357 Magnum into his mouth, and pulled the trigger. But the gun misfired! Pastor Bill fought back, then they pulled the trigger a second time. This time, the bullet shot out of Pastor Bill’s cheek. The cops said that someone had to be looking out for Pastor Bill, because a 357 Magnum rarely misfires,” Penny recalls.

After that violent incident – and several others, many people would have left Bushwick (and understandably so!). However, Pastor Bill saw it as a reason to stay. From the ghettos of America to the garbage dumps of the Philippines, Metro World Child is now a global ministry that serves disadvantaged children through weekly Sunday School lessons, child sponsorships, special programs, and personal home visits. “We live like the people we serve,” says Penny. “We don’t live in Manhattan, or commute from New Jersey and Long Island. We live right there, near the housing projects. We see rats and syringes. Pastor Bill wants us to know what these children deal with on a daily basis. When I walk outside, there are drug dealers and gang members sitting on the stoop. But now, to them, we’re a sign of hope. When I walk outside, they stand – to show respect for what we’re doing in the community,” Penny shares.

Beyond New York
Although called “Sunday School,” Metro World Child’s Bible lessons don’t actually occur on Sundays. They take place around the world on various days of the week. “In New York, we teach Sunday School every Saturday. We bus over 5,000 kids within a four-mile radius to our ministry,” says Penny. “Throughout the week, we have Sidewalk Trucks that go to every borough in New York. The Sidewalk Trucks serve about 17,000 kids. You should see these children pour out of the projects when the trucks arrive. We pray with them, play games, and teach a Bible lesson. And some gang members just stand around, listen, and watch. This is something that goes beyond New York. We do this all over the world – in the United States, Philippines, Romania, South Africa, Kenya, and India. Every week, we serve about 100,000 children globally.”

You Can Do Something
Pastor Bill’s journey teaches this lesson: When we’re dealt a difficult hand, we can either play the tough cards we’ve been given – or fold to life’s hardships. Pastor Bill decided to make the most of the pain and rejection that he was dealt. And no matter what you’re going through, you can make the most of what you’ve been given.

“Before I worked with Metro World Child, I visited New York and rode one of the ministry’s buses,” Penny reflects. “After the trip, I heard God ask me, ‘What are you going to do?’ Next thing I knew, I sold my house in Tenessee, and moved into a studio apartment in New York. I’m not saying that everyone needs to sell their stuff and move, but everyone needs to open themselves up to the possibility of God using them in a new way. The mission field isn’t only in Africa and the Philippines. It’s in our backyard. We see the corner, but God sees around the corner. He’s waiting for all of us to look beyond our pain and brokenness. We need to open our eyes, open our hearts, and help rescue someone who is hurting.” 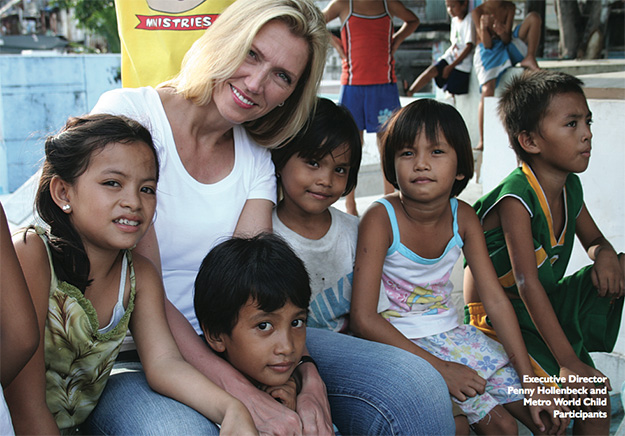 More in this category: « What Christians Can (and Should) Do for American Public Schools Shop Your Faith »
back to top